It was winter in the South Caucasus, and an American recording engineer in his mid-20s named William Sinkler Darby was on the road.

Darby was already a pioneer in that fledgling industry, having worked in Emile Berliner’s studio in Washington, DC, in the mid-1890s. After arriving in London in 1899 to meet his former colleague at Berliner, Fred Gaisberg, and to help establish the soon-to-be massive Gramophone Company, Darby would begin an itinerant lifestyle that would take him across multiple continents in just a few years – rarely, it seems, with the time to look back. The market for sound recordings was beginning to explode.

He began traveling long distances by rail as Gaisberg’s steadfast companion and assistant, demonstrating the new gramophone and recording artists across Europe. Within a short time, they’d recorded in Leipzig, Budapest, Vienna, Milan, Paris, Madrid, Valencia, Glasgow, Belfast, and Cardiff. By 1901, Darby started to lead recording expeditions on his own, bringing him again to Germany, the Netherlands, Poland, and Moscow, recording hundreds of sides. By February of 1902, Darby had already recorded in St Petersburg multiple times, learning how to deal with extreme cold and the temperament of Feodor Chaliapin.

Yet, this trip was different. It seems unlikely that any recording engineer had set foot in the Caucasus region to make recordings of local music – music that was decidedly different than anything the Gramophone Company had recorded before, in an utterly contrasting atmosphere and culture. The closest they had come was with Fred Gaisberg, who in 1901 traveled to Kazan in Russia, to record the music of Tatarstan. Gaisberg was horrified during his entire visit to Kazan and unleashed his prejudiced invective in his diary: “The Russian part especially contains handsome buildings and churches. Streets are orderly, and there are plenty of parks. But the Tatar section is beyond a doubt the dirtiest, filthiest vile-smelling place I have ever come across. All the Tatars have that Oriental smell about them that seems to asphyxiate you. I always feel faint when near them.”

One wonders if Darby felt the same. Likely the music was baffling to these engineers from America. Up to that time, the normal recording repertoire for the Gramophone Company was what one might expect. It primarily consisted of Western classical vocalists and instrumentalists, comic singers, military bands, and other entertainers. A substantial amount of European folk music had certainly been recorded by that time – in Spain, for example – but Asia was a different story. In 1902, even Cairo had not yet been visited and captured on disc. This was an industry in transition in more ways than one; improving rapidly in terms of technology, yet still in its earliest stages, recording anything, expanding markets. The Gramophone Company’s records at that time were one-sided, and pressed in the company’s plant in Hanover, Germany. The reverse sides of these discs were etched with the image of a cherub cutting grooves into a record with the quill of a feather. In 1901, a 10″ disc that held 3 minutes of recording was perfected and put into use – but the 7″ disc was still commonly used as a primary sound carrier on these excursions, and at the home office in London…even if it sometimes held far less than two minutes of music.

Despite the vast expanse of mountainous, rural terrain to cross, there were important, multicultural urban centers in the Caucasus, and Darby was sent to explore them on this brief trip, presumably to investigate if business was viable. And by doing so, he accidentally made history. His two stops were Baku, in present day Azerbaijan, and Tbilisi, in Georgia. It’s likely that he took the Transcaucasus Railway, which by the early 1880s reached both cities. In any case, Darby arrived in Baku at 2 AM, February 6th, 1902. He spent only two days in the city, though he managed to record 57 discs’ worth of material – mostly brief, 7″ masters. Azeri music was labeled “Persian Tatar” when Darby’s recordings hit the shops, but he also recorded a number of Armenian artists. He recorded several sazandar, the trios associated with Azeri mugham music, as well as instrumental soloists, a poet, and folk dances.

It took approximately two days for Darby to arrive in Tbilisi, some 600 km away. Tbilisi, or Tiflis, was considered the cultural epicenter of the Caucasus – an ancient city where numerous peoples intersect, with its own fascinating musical history and styles, and which was then under the Russian Empire. When Darby arrived at 8 AM on February 10th, he went to the old Hotel London. It was already common practice for engineers to set up sessions in hotel rooms – this procedure went on for decades. The Hotel London, with it’s banner sign in French (“Hotel de Londres”) sat right on what was once known as Alexander Park, named after Alexander II. (It is now known as April 9 Park, in commemoration of the tragedy of April 9, 1989, at an anti-Soviet march where many protesting Georgians, mostly young women, were killed or injured by the Soviet army.) 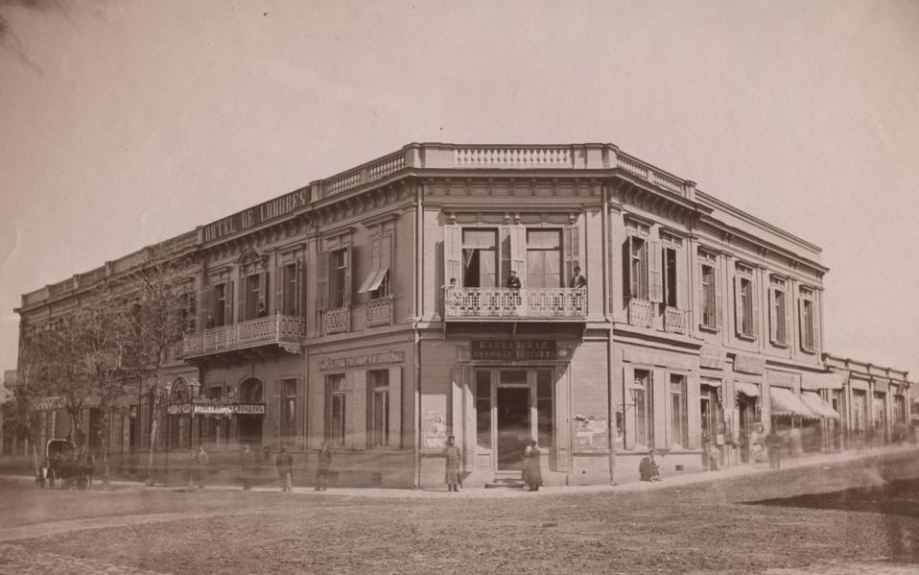 Darby spent a total of 9 days in Tbilisi, and what we know of the recordings he made there again show the musical diversity of the region. He recorded the first Georgian polyphonic choirs, violin and tar improvisations, a host of Armenian and Georgian singers, double reed duets of duduk and zurna, even soloists on the wooden salamuri flute and the tárogató reed. There were songs from the Georgian regions of Guria, Kakheti, and Kartli. All told, he recorded 117 records, more than two-thirds of which were one-sided 7″ releases. Only 31 were longer performances on 10″ masters, of which this example is one.

Where were these discs sold? According to Anzor Erkomaishvili of the Rustavi Choir, the Gramophone studio shop in Tbilisi was in operation from 1901 to 1914, and at least for a time run by G.S. Davidov. It was located on the main street of Tbilisi – what was then called Golovinsky Prospect and now known as Rustaveli Avenue.

This appears to have been the only recording from those sessions featuring music from the region of Abkhazia. An instrumental featuring two double-reed zurnas and percussion. (I thought, perhaps, that they might be playing the Abkhaz reed, the abyk, but I don’t think so – at the same session two zurna players are listed performing some duets with duduk, so it is very likely those are the same performers.) The label of the disc itself says only one thing in Georgian handwriting: “Abkhazuri” along with “Grusinian” in English, which was the old adjectival form for “Georgian.” No performers are credited, though we do have some additional notes that exist in the original ledgers – the term “Kabardinskiy Tanetz” was listed. This indicates that it’s a dance tune from northwest of Abkhazia, in the region known as Kabardinia, now part of the Russian republic of Kabardino-Balkaria. Whether or not these are Abkhaz musicians, we’ll probably never know.

The Gramophone Company must have found some success in these sessions, as they sent engineers Franz and Max Hampe back to Tbilisi several times between 1903 and 1907. In 1909, Franz Hampe recorded in the city on his massive Central Asian tour so well-documented in Will Prentice’s Before the Revolution CD on Topic, as well as the Drinking Horns and Gramophones CD on Traditional Crossroads – both essential CDs and primary references. One year later, engineer Edmund Pearse recorded a host of sides in Tbilisi every year from 1910 to 1914. Then, the Great War, and the Russian Revolution.

Over the past 27 years, since Georgia declared its sovereignty, Abkhazia has been the site of strife, accusations of ethnic cleansing, and war between Russia and Georgia. The Abkhaz consider themselves a Russian republic, though they are recognized by just a few international entities. Georgia considers it an autonomous republic of Georgia.

The Hotel London, as it stands today, is a shadow of its formal self. It’s now a private apartment building in a state of arrested decay. I went past just two weeks ago. Its front entrance has been replaced, but peek inside the side entrance and you might be able to imagine the sounds coming out of one of the rooms that February, 115 years ago. 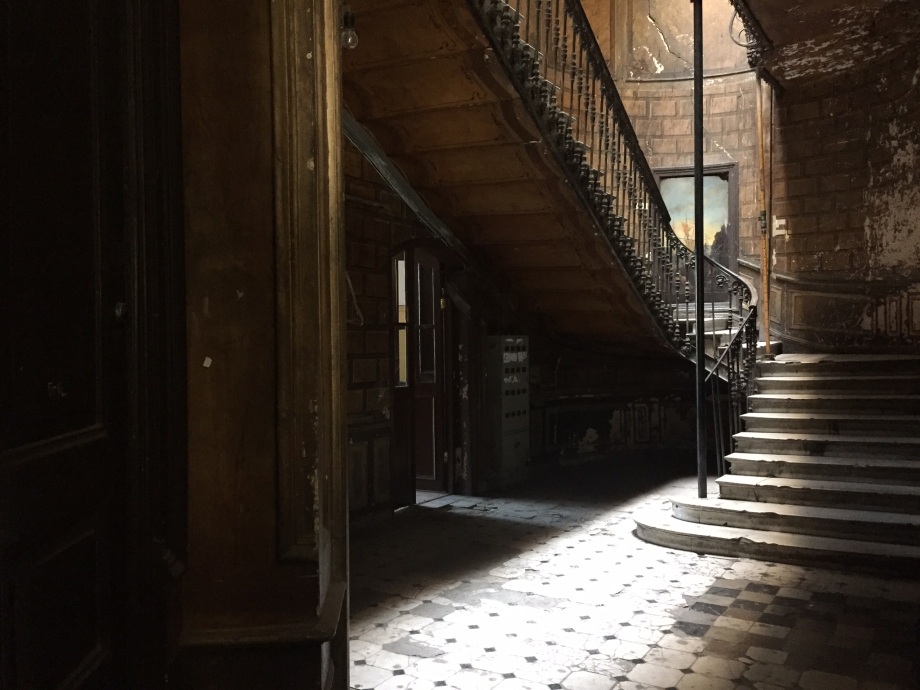 First item of business: a huge thanks to painter, sound artist, and friend of the site Steve Roden for his write-up on Excavated Shellac in The Wire this week (found here). A generous gesture, and I appreciate it.

And now, some music to greet your week with, and to play loudly.

Georgian polyphonic singing is an art that apparently pre-dates Christianity, though it’s used in Orthodox religious practice as well, having been brought to the church most likely through the influence of folkloric tradition. It’s a positively ancient type of music that, since 2001, has been protected from extinction by UNESCO as a “Masterpiece of the Oral and Intangible Cultural Heritage.”

There are disagreements about the precise origins of polyphonic singing in Georgia, although many traditional Georgian choral songs actually date back to a “cult of the grapevine.” There are work songs, songs for festivals, and “table songs” – songs for singing around the table, so to speak: with food and wine. There are several types of polyphonic singing as well: complex polyphony from the Svaneti region in northwestern Georgia, three-part polyphony from western Georgia, and two-part polyphony over a bass drone, which is from Kakheti. They frequently take unconventional harmonic turns.

Today’s piece, the Chakrulo, is a table song, and is from the Kakheti region, featuring two soloists (N. Togonidze and I. Mchediishvili) and the aforementioned bass, choral drone. The recording was organized by Georgian composer Shalva Mshvelidze, who since 1930 had been traveling around Georgia recording folk music. This was most likely recorded in Kakheti ca. 1957, and supervised by Mshvelidze (rather than “led by” him, as the label states – that’s my guess, though I could be wrong).

It is also worth bringing up the influence of the Soviet state on such recordings of folk music: it was everpresent. Perhaps with Georgian music, a little less (a sizeable portion of Georgian choral music is made of vowel syllables as opposed to words – less content to worry about!), but certainly all aspects of religion were removed from most folk ensemble recordings. Then again, CCCP released recordings of choir music from the small town of Martvili (then known as Gegechkori), known for its ancient monastery, at around the same time. One thing is for certain, earlier Georgian choral music first recorded by the Gramophone company in the early part of the 20th century features voices that are incredibly raw – though the types of songs and styles are the same. By the same token, a 1988 recording of the Chakrulo by the Rustavi Folk Choir is exceptionally polished. I believe this piece, whatever influence the Soviet monolith had on it, is moving, and exceptional. The concept of “authenticity” is always tricky – when in doubt, lead with your ears.

For early Georgian choral music, we are lucky to have the CD Drinking Horns and Gramophones, released on the Traditional Crossroads label.