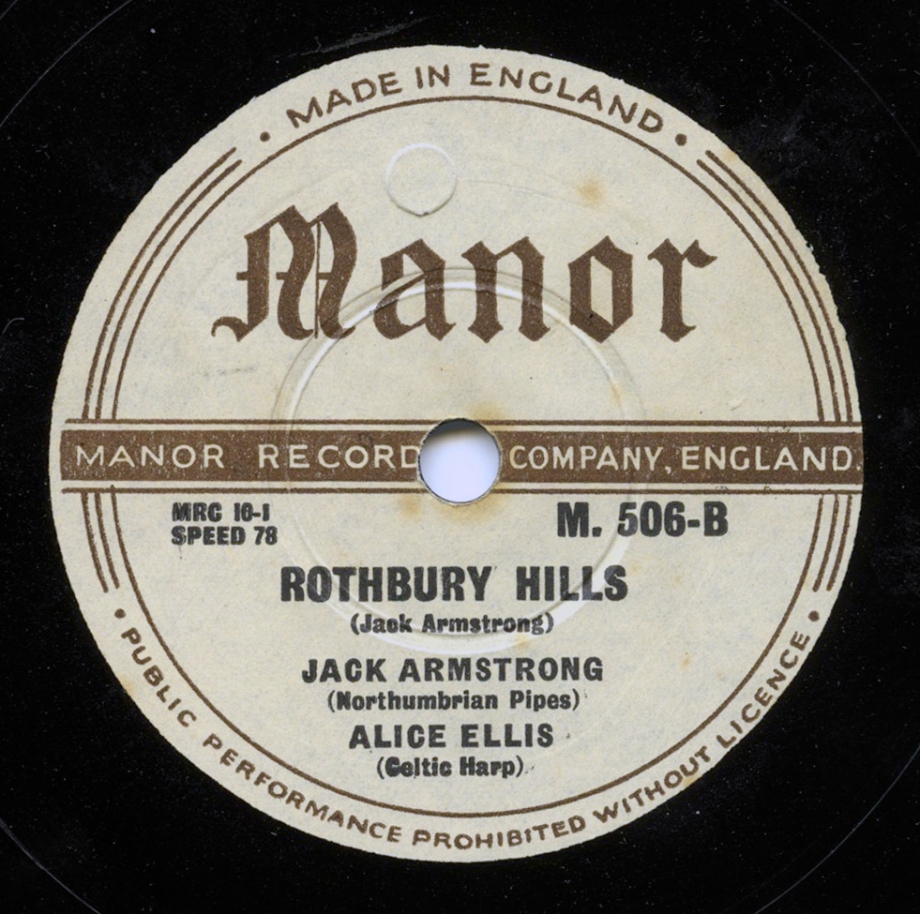 I guess we’ll end Excavated Shellac’s 2014 on a musically wistful note – but, not for any real reason other than traditionally the new year should bring a time of reflection, or new beginnings, right? This year should bring some surprises if you’re fans of this website, if all goes as planned. In terms of music-related activities, I spent most of 2014 working on some long and short-term music projects yet to be released, and helping some friends with their releases…but mainly I was just enjoying collecting and listening to music, shutting off all the noise, and spending time with friends.

If you’re a fan of the Secret Museum series, you might be familiar with the elegant Northumbrian smallpipes and Celtic harp tunes “Chevy Chase” and “The Cott,” performed by today’s featured duo of Armstrong and Ellis. It’s a special record and difficult to track down. This is the equally terrific flip side, issued on the obscure Manor label (not to be confused with other labels with the same name, active at the same time in the US and UK). This particular Manor label appears to have been around only for a very short time, issuing about a dozen records with fairly bad pressings, mostly of Northumbrian artists, before disappearing completely.

Jack Armstrong began handcrafting his own smallpipes at a time in the early 20th century when there were very few people doing so. Born in 1904 in the town of Wideopen, Armstrong didn’t begin playing the pipes seriously until about 1928, and began competing. From a family of miners, Armstrong managed to successfully avoid that profession and continue playing music, adapting a style played by his father, also a piper. He formed a band named the Barnstormers that recorded for HMV, and became the official piper for the Duke of Northumberland in 1949, the same year this piece was recorded. He died in 1978 in Wideopen. His occasional accompanist on “Celtic harp,” Alice Ellis, was a composer herself, having composed the Armstrong standard “The Cott.” An occasional pianist with the Barnstormers, she passed away in 1995.

The tune “Rothbury Hills” is a “slow air” written by Armstrong, something that he specialized in – a style that was different from his contemporaries and emphasized the quiet nature of the pipes. Rothbury is a small town on the River Coquet, inland and northeast of Newcastle upon Tyne, and the hills in question are likely the nearby Simonside Hills. The Hills have a legend attached to them – that their evil, moss-hat-wearing dwarves called duegar can lead people astray if one is not careful.

Thanks to Bill Dean-Myatt and GordyB. Some photos of Armstrong (and more music) can be found on the British Library site, here.