The roots of the instrument known as the taishōkoto begin with a trip to Europe and the US during the early 1900s by a man with the stage name of Gorō Morita (real name: Nisaburo Kawaguchi). A musician and successful instrument maker, Gorō Morita returned to Japan and began working on a portable musical instrument that was, according to researchers, meant to be an inexpensive way for Japanese people to play western music, and one which applied some of the same mechanics found in a typewriter. Some of this history is cloudy. It’s also stated that he was influenced by the two-string nigenkin instrument, a kind of variation on the koto. Perhaps it’s safe to say that he was influenced by zithers in general, and several posit that while in Europe he may have come in contact with the violin-zither, the German akkordolia instrument, or maybe even the Swedish nyckelharpa. Some also suggest that while in the U.S., he may have seen the mountain dulcimer. 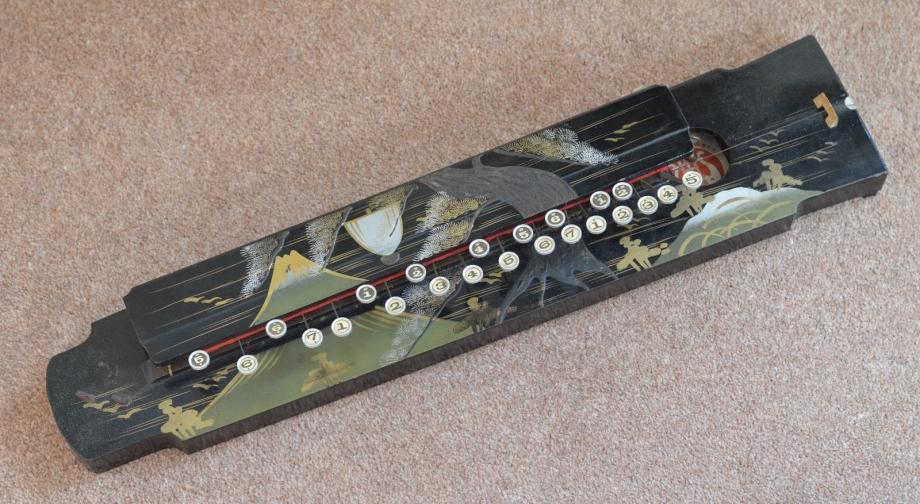 In any case, in September of 1912 in his family home of Nagoya, Morita perfected his instrument, introducing the Japanese version of what is ostensibly a keyed dulcimer or “keyed banjo” as it’s sometimes called (though it’s not much like a banjo). Morita first named it the kiku koto, then later changed the name to taishōkoto (also commonly taishōgoto) because of its relation to the koto coupled with a nod to Emperor Taishō. The instrument has a hollow body like a zither and a row of numbered keys that are pressed against the strings to change their pitch, and it’s always strummed. The early version had only two strings, though today’s Japanese version normally has six strings.

Sales were apparently slow for several years, though there is proof that the quick learning-curve to play the instrument was part of its sales pitch and eventual popularity (even with advertisements directed toward geisha girls, indicating that they could learn taishōkoto faster than the shamisen). Gradually, it became a hugely successful amateur instrument during the later Taishō era, especially with young people as an acceptable method to play Western music. Interest waned during the run-up to the World War II, and it was forgotten in the country until the 1970s, when it became a popular instrument once again, directly marketed toward middle-aged women.

Despite this long preamble, I’ve never found a Japanese 78rpm disc that featured taishōkoto. Doubtless they do exist (if anyone can contribute, please do) amid the scores of shamisen and koto records and the thousands of western-influenced Japanese discs – but I’ve not heard one. To me, the story of the taishōkoto is interesting because of where it ended up.

“Waves of nightingales” is the rough English translation of the name of the South Asian instrument known as the bulbul tarang or “Indian banjo.” Another scholarly source translated it as “the nightingale’s cascading voice.” But, essentially it’s a modified taishōkoto! Like its ancestor, its history is also muddy. Some sources state that the taishōkoto arrived in India from Japan in the 1930s, leading to its popularity as an instrument for amateur and home use in the Punjab region. The South Asian version has two sets of strings – one set for melody, which is what the keys hammer, and another set of tuned drone strings. The scant technical writing on the bulbul tarang usually mentions that the instrument is humble or unadorned, even rudimentary, something close to a children’s instrument.

Because of its amateur status, it’s not surprising that very little bulbul tarang was recorded during the 78 era. Examples are all very rare, and recorded in the 1930s, featuring instrumental performances by artists such as Jagannath Mohile, K. Arumuga Mudaliar, and the example here, recorded in Calcutta by Master Shankar Banpel, in the Mishra Kafi raga.

A surprising twist in this story is the abrupt appearance of the taishōkoto in recordings from Kenya, beginning in the mid-1950s. Fans of CDs of 60s Zanzibari and Kenyan music may recognize it instantly. East African taarab music had been sporadically recorded in the early 20th century. The first major burst began in 1928 and lasted approximately three years, with HMV recording artists like Siti binti Saad and her group, Columbia recording in Zanzibar, and Odeon recording in Mombasa. After the early 1930s, there was a major recording lull in East Africa. Up to that point, the taarab music recorded was more traditional, principally featuring oud, violin, and darabukka drum. After World War II, when recording picked up again, that older style seems to have given way to two strains of a more orchestrated type of taarab – one that was influenced by Middle Eastern orchestras, and another that was influenced by Indian and Bollywood orchestras, referred to as taarab ya mtindo ya kiHindi. This is not surprising, since many Indians in East Africa were in the independent music and film industry, operating and owning music stores, theaters, and small record labels. Indian taarab especially adopted the taishōkoto, and one of the primary stars (he’s often credited as “Radio Star”) was Yaseen Mohammed. To accompany the bulbul tarang solo, I’ve uploaded a piece by Yaseen and his erstwhile partner Mimi (last name unknown – for now), on a Kenyan 78 from probably 1956 or so. Yaseen recorded for many labels (Jambo, Mzuri, and Columbia just to name a few) and was obviously a sought-after crooner.

It’s a perfect example of taishōkoto on a Kenyan disc, and has both Indian and Middle Eastern influence. Hundreds of records in this style were recorded and enjoyed. They turn up rarely, if ever. While there are valiant attempts being made, with the East African market flooded with over 50 small 78 labels, it’s unlikely that we’ll see a true discography any time soon – I still come across, or am made aware of, entire labels for which there appears to be no existing documentation whatsoever.

9 thoughts on “Traveling With the Taishōkoto”