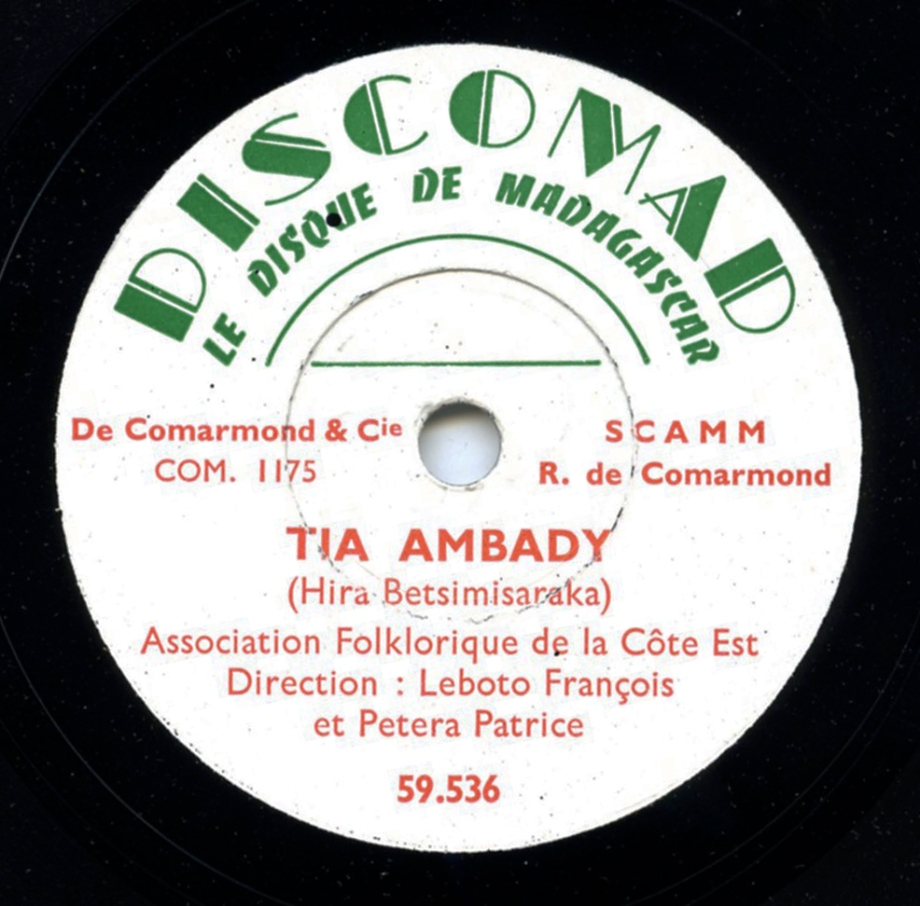 Hello, hello – it’s been a while. The collecting hasn’t stopped and has continued apace, but I’ve been concentrating on some upcoming releases which I hope can see the light of day soon. That, coupled with a reticence to repeat myself endlessly across numerous posts, created a little delay. But, we are back. This one is still hot from the hands of the postal service. Maybe it’s still fresh to me. It’s back to the music of Madagascar after many years, for a style that barely made it to disc during the 78rpm era: accordion-based dance music.

The first substantial, commercial recordings of Malagasy music were made by the French divisions of the Columbia and Odeon labels, on site, in 1930. The Columbia session resulted in over 160 records. Primarily, Columbia featured groups accompanied by piano or harmonium, often examples of Malagasy operetta known as kalon’ny fahiny. There were also some performances with the classic valiha tube zither, mandolin, guitar, and sodina, the local flute. These records weren’t just for locals in Madagascar – they were also for the French who might be interested in “exotic” music of the colonies. “[In Madagascar] reigns a delightful atmosphere of musical fragrances, songs with languid and fresh melodies; all a sensuous and endearing poetry,” claimed the Columbia catalog that advertised those discs, which also deliberately noted how essential it is to the listening experience that the Malagasy music they recorded was substantially influenced by its connection to Europe. It could be that this was the reason for the inclusion of all the piano/harmonium music – however, kalon’ny fahiny music was extremely popular in Madagascar at that time. While many examples had an “uptown” operatic feel to it, much of it is inescapably in keeping with the melodies of Malagasy folk music, and the incredible nasal, vibrating soprano vocals.

It’s unclear if Odeon was recording at the same time, immediately before, or immediately after Columbia. They, too, issued a generous 125 records, at least. And again, their session yielded a large amount of music by elite theatrical troupes accompanied by piano (though violin, guitar, mandolin, and accordion performers also were recorded), their bandleaders finely coiffed and dressed in suits in their catalog. Odeon’s exclusive representative on the island was a massive distribution company founded in Réunion at the turn of the 20th century, Cie Marseillaise de Madagascar, but again, these discs were also distributed in France to intrigued locals. However, as historian Paul Vernon has pointed out, the initial pressing for these discs in this nascent market was scant: about 50-100 copies each. While they appear to have been occasionally re-pressed, virtually all of them are rare.

Today, if anyone at all is familiar with early Malagasy music, it’s due to an incredible selection of recordings made in 1931 in Paris, during the massive, years-in-the-making Paris Colonial Exposition, where Malagasy musicians (among many others) traveled to perform, staying for months. Most all of these discs have been compiled on influential and highly recommended CDs, namely The Music of Madagascar on Yazoo, and Madagascar: Musiques de la côte et des hauts plateaux on Fremeaux. They prominently featured stunning choirs accompanied by the valiha, whereas most all the several hundred Odeons and Columbias that had been released just prior, did not. The performances with valiha (pronounced “valee”), the tube zither that, when played, sounds like rain on a quiet lake, could have been out of fashion by 1931, perhaps increasing their importance in hindsight. During the Exposition, the French office of HMV issued twelve records’ worth of songs by the visiting musicians; Polydor also issued twelve discs, and Pathé issued seven. Some of the same tracks appear to have been recorded by both companies. Some of the Pathé/Polydor discs were re-pressed in limited amounts by the Musée de l’Homme in Paris, and some of the Polydor tracks were re-pressed after World War II, after the Philips label had the rights to the French Polydor/Polyphon material.

As beautiful as these recordings are, one style that was not featured was accordion-driven music for dance, a style that crops up regularly on more contemporary ethnographic LPs and CDs from Madagascar. A few 78s managed to squeak out, however. I reissued a side from the obscure Colombe label on Opika Pende, one of a cluster of at least three discs of field recordings featuring accordion shunted between piano and operatic releases, issued in the early 50s. And this piece, from the Discomad label, ca. 1959-60.

While the performer’s name might make this look like an ethnographic recording, it’s not – the name of band/group performing here is actually “Association Folklorique de la Côte Est,” and its musical directors were François Leboto and Patrice Petera. It’s a song of the Betsimisaraka, the second largest ethnic group in Madagascar who are generally concentrated along the east coast. “Betsimisaraka” has been translated to “The Many Who Will Not Be Sundered,” “The Many Inseparables,” and perhaps the most contemporary-sounding, “Those Who Are Many and United,” the name stemming from the early 18th century when several local clans were joined. I’m not sure if this is basesa music of the Betsimisaraka, which is a kind of ceremonial dance music with accordion that is played during tromba. Tromba is a loose term for rituals having to do with spirit possession, but that can feature dancing, music, and celebrating. Either way, it’s rare to find performances this alive, with shouts and hollers, and not have them be ethnographic and instead commercial releases. This and the Colombe discs are the only 78s I know that feature this style of music.

The label Discomad was founded in Antananarivo ca. 1959-60 by a man named Raoul de Comarmond (1908-1993). Born in Mauritius, Comarmond started working with record companies in Madagascar as early as 1937 when he helped to organize a Polydor recording session. By the early 1950s, he was recording for the French branch of Decca, his discs branded with “R. de Comarmond” on them. His business, Comarmond et Cie, a distribution company, was located on Avenue de l’Independence (then “Avenue de 18 Juin”). He founded a pressing plant to produce his new discs in 1960, as well as Discomad’s sister labels, Decco and Decophone. All told, he issued approximately 350 78s, certainly the the most successful Malagasy label outside of the major European concerns. Discomad was issuing 45s by 1962, though I am unsure what the crossover was between formats. For example, the Association Folklorique de la Côte Est issued at least two 45rpm EPs on Discomad, yet this piece does not appear on either. It could be this was its only issue. In any case, Discomad continued for decades, run by Comarmond’s son, Jean-François, and then his grandson, Stephane.

Thanks to Thomas Henry and the works of Paul Vernon!