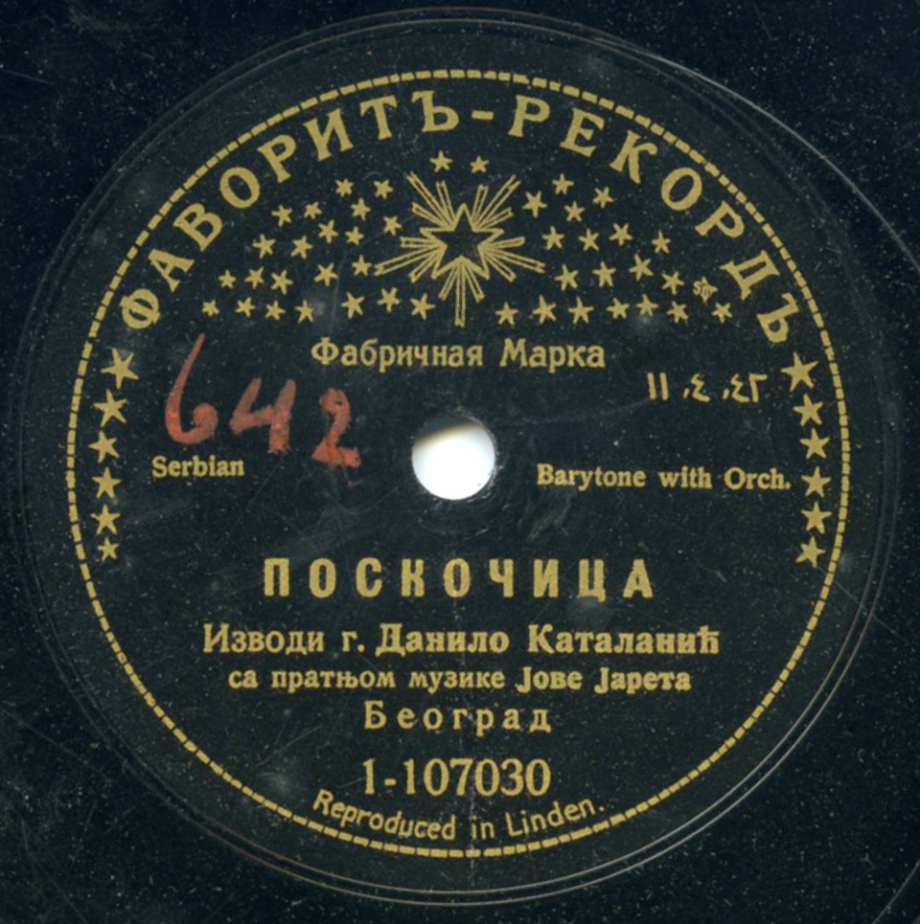 In the earliest days of the gramophone industry, the small handful of major players producing and distributing records were greatly concerned with maintaining their market share, keeping their technical practices secret, and expanding their recordable horizons. In Europe, the rapid establishment of the Favorite label in 1904 must have seemed like a shot across the bow. Based in Hanover, where the Gramophone Company had their pressing plant and a thriving office, Favorite began by pilfering an engineer, Otto Birkhahn, from that company, giving him more than double his normal salary. This was no joke; there were only a small number of people on the planet familiar with this newfangled technology in 1904. Within a short period, Favorite had also acquired a disgruntled engineer from the Beka label, Willy Bielefeld, who had previously offered his comparatively inexpensive services to the Gramophone Company but was summarily rebuffed. Not only that, but Favorite also managed to abscond with Carl Dietsch, a leading employee of the German branch of the Gramophone Company. By 1905, this budding label was issuing new double-sided records and the race was on.

Favorite would thrive for the next nine years. Naturally, they were competitive in their repertoire of European popular and classical musics – they had to be, to survive. But – and here is the catch for Excavated Shellac readers – as early as 1905, they were also recording in Cairo. They recorded in Turkey that same year and returned multiple times. They recorded a session in Bangkok, at least one session in China, multiple sessions in Brazil, Argentina, and even recorded in two locations in Ecuador (with records released under a sub-label, Precioso), probably the first commercial label to do so. They had 40 record presses at their factory in 1908 and had expanded their plant again in 1911. The following year, they were offering 25,000 titles.

But, the German record industry found itself in tumult during the run-up to World War I. By late 1913, what was left of Favorite moved to Berlin, and the company soon liquidated. The Carl Lindström AG concern, a gramophone producer who had only recently gotten into the disc business with their Parlophon label, effectively usurped Favorite, as it had with the Lyrophon, Beka, Odeon, and Dacapo labels. Lindström would continue marketing the Favorite label after the War, reissuing their material, until about 1926. They also loaned some Favorite masters to Columbia Records in the United States, notably their Turkish and Greek material.

This particular track was recorded 109 years ago, in mid-1911, during a session in Belgrade by Favorite recording engineer Wilhelm Winkel. The artist, Danilo Daniel Katalan, was born in 1880 and specialized in humorous folk songs such as the bećarac and the svatovac, as well as uptempo dance tunes such as this, “Poskočica”: literally a “jumping song” for dancing, stemming from the word poskočiti, which means to jump up and down. Katalan recorded under the name “Danilo Katalanić,” as well as “D. Katalanović,” and also the pseudonym “Mirko Katić” when he recorded for the Gramophone Company in 1910. He’s accompanied by the Romani orchestra led by Jova Jare (literally “Jove the goat”; likely a nickname).

Sadly, Katalan, a Sephardic Jew, was murdered at the Topovske Šupe concentration camp in 1941, located outside of Belgrade on a former military base. The camp was in existence for only a few months and run partly by the collaborationist government of Milan Nedić. It was the site of the murders of approximately 4,300 people during that short time. A terrible tragedy to consider set against the sheer joy of this early track.

Big thanks to Nikola Zekić and Will Hancock.