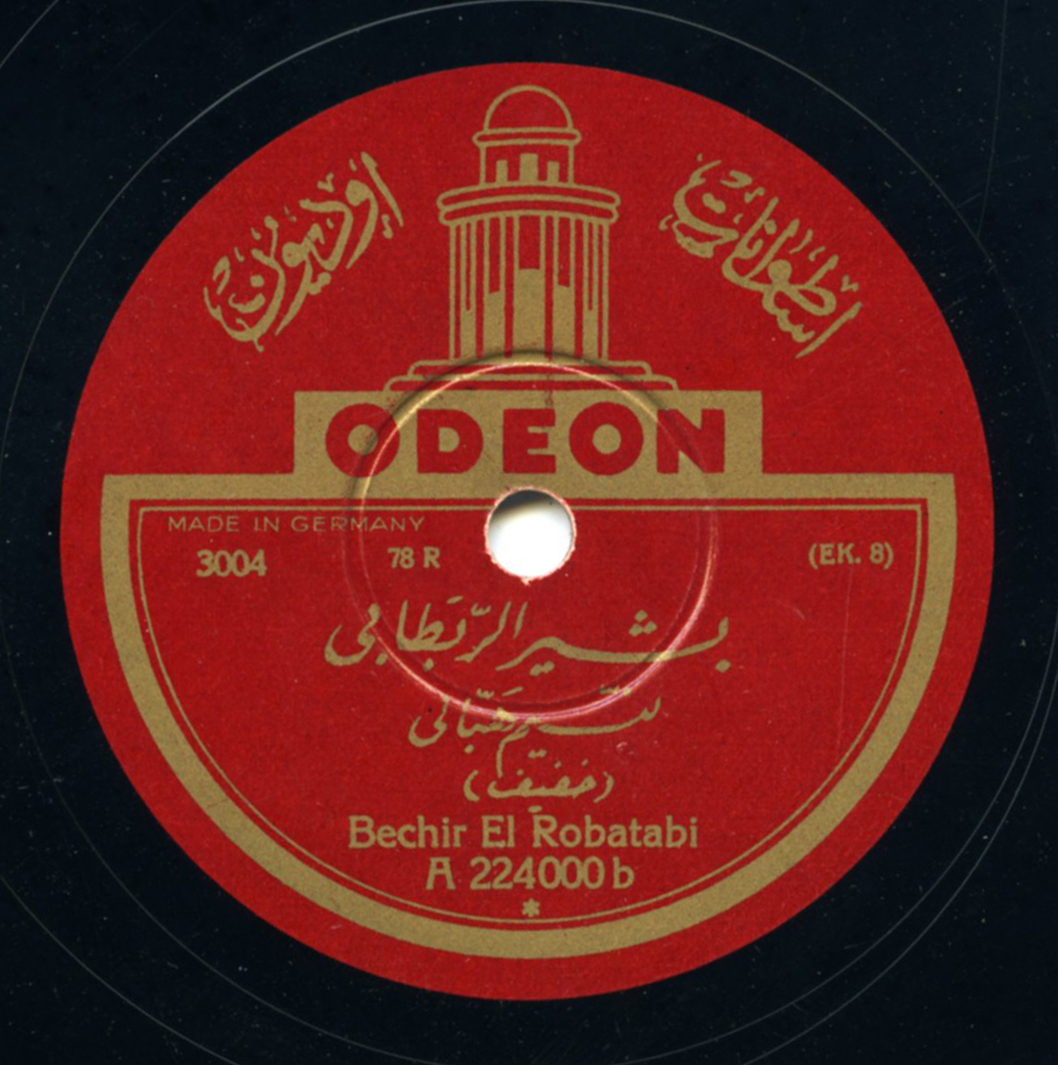 In July of 2020, I attempted a simplistic recording history of Somali music on 78; a history still clouded in a lot of mystery, with most known recordings not fully documented. Perhaps even more esoteric a topic is the recorded music of Sudan on 78. As with Somalia, the early music of Sudan certainly was set to disc and sold commercially, but compared to the music of Egypt and North Africa, or the music of the Levant, or even music from the Persian Gulf and the Arabian Peninsula, little of it has been documented in a methodical fashion, at least in English. I would also say that outside of some collector and historian circles, this history is altogether unfamiliar.

Prior to the 1950s, it appears there were no “sessions” in Khartoum. It was not a stop for peregrine engineers from the European multinational recording companies, although technically, by 1899, one could take trains from Cairo to Khartoum, crossing the Nile at Wadi Halfa just south of the Egyptian border. The first known recordings of music from the Sudan appear to have been made in Cairo in February of 1903 by Gramophone Company engineer Franz Hampe. It was the company’s first expedition to Cairo and was likely exploratory, to a degree. They hadn’t yet contracted or recorded such famed early Egyptian singers as Abdel Hayy Hilmi or Yusuf Al-Manyalawi. Hampe cut a grand total of four sides by the “Sudanese Vocal Quartet” during his trip. Two were seven-inch, single-sided 78s, and two were ten-inch. The larger discs were both titled “Love Song of Sudan.” The shorter tracks were titled “Prayer” and “Song.” That’s all that is known, for now.

It took that same massive company another twenty-eight years to once again record music from Sudan, when in March 1930, back in Cairo, Sudanese singer Fatma El Chameya cut six sides for GramCo/HMV. Well, technically only two of her records were released, as two of the sides were “damaged” and never issued, according to the files. However, by that time there was a young Sudanese businessman in Cairo working with other labels, and he was bringing Sudanese musicians to the city to record: an entrepreneur who went by the pseudonym Dmitri Al-Bazaar.

Dmitri Al-Bazaar was born Dimitrios Nikolaou Kativanides around the turn of the 20th century in the Dongola area of northern Sudan. Al-Bazaar’s father was a Greek-Austrian who lived and worked in Sudan, and whose mother was the sister of famed Austrian soldier and colonial administrator in the Sudan, Rudolf Carl von Slatin (1857-1932) aka “Sultan Pasha.” Al-Bazaar’s father married a local Dongola woman, and while growing up young Al-Bazaar lived an educated, multilingual, bi-cultural existence, with his father calling him “Dmitri” and his mother calling him “Mohammed.”

His first business was in the central “bazaar” of Khartoum in the early 1920s, where he acted as a local photographer and newspaper agent for Cairo papers and magazines, eventually establishing a popular shop and magazine “library.” At some point in the mid-1920s, his Cairo connections suggested he become a gramophone agent in Khartoum, and it appears that by 1925 he was the regional agent for the Baidaphon label which had a thriving Cairo department (although as a company it was largely run out of Beirut and Berlin).

Legend has it that Al-Bazaar tried to engage his Sudanese musician friends to record in Cairo around this time, but they were unenthusiastic, thinking that the act of playing music on discs could be perceived as fomenting resistance against colonial powers. It appears that Al-Bazaar eventually prevailed, although from here on out, precise details are vague. It’s been said, however, that the first Sudanese artist that Al-Bazaar arranged to record was Abdullah Al-Mahi, who recorded several discs in Cairo ca. 1928.

The music that Al-Mahi and the Sudanese musicians who also recorded during that era is now referred to as haqeeba music. The story of haqeeba is fascinating as it was not a term in use at the time. Haqeeba, meaning “briefcase,” is in reference to a Sudanese radio show from the 1940s hosted by Ahmed Mohamed Saleh, on Radio Omdurman. On this show, which was called “Haqeebat al-Fann,” Saleh would play old Sudanese 78 rpm records – discs from his briefcase, so to speak. Thus, the term haqeeba was born, used to refer to older, popular Sudanese music on commercial 78 rpm records.

It appears that, apart from the two discs made in 1930 for HMV by Fatima El Chameya (one side of which can be heard on the 2008 Honest Jon’s compilation “Sprigs of Time”), the majority of early Sudanese recordings were issued on the Odeon label. They appeared scattered throughout their Cairo series from the late 1920s to the late 1930s. By 1937, Odeon offered over 118 discs from Sudan, including discs by Abdel Karim Karouma (Romanized simply as “Karoma” on discs), Mohamed Ahmed Sarour (“Sarur” on discs), Etoum and Ibrahim Abdel Jalil, Mademoiselle Nagat, Osman Kili, and Bechir el Robatabi, among others.

Major labels were not the only outlet for Sudanese song at that time. Again, very little has been written in English about Armenian music entrepreneur Setrak Mechian, except that he was a notorious early gramophone agent, salesman, and recordist. He was born in 1877 and began his career as early as 1904, attempting to get into the business in the Levant. By 1908, he was Odeon’s agent in Beirut, and already had earned the ire of both major and independent labels for bootlegging all of their records, likely by crudely making copies of existing discs with a pair of hydraulic presses. That same year he started his own label – “Fabrik Mechian” – and moved his business and production to Cairo. Apparently he was a one-man-army, recording the artists, announcing the performers himself, and even pressing the records himself; a true renaissance man. While a nuisance to the moneyed international labels and with records pressed on poorly refined shellac, Mechian was dogged, and recorded many important Egyptian singers during the years his label was active. In the 1930s, Dmitri Al-Bazaar, our agent from Sudan, is documented as working for the Mechian company in Cairo and this is likely when a variety of Sudanese recordings also began appearing on the Mechian label. 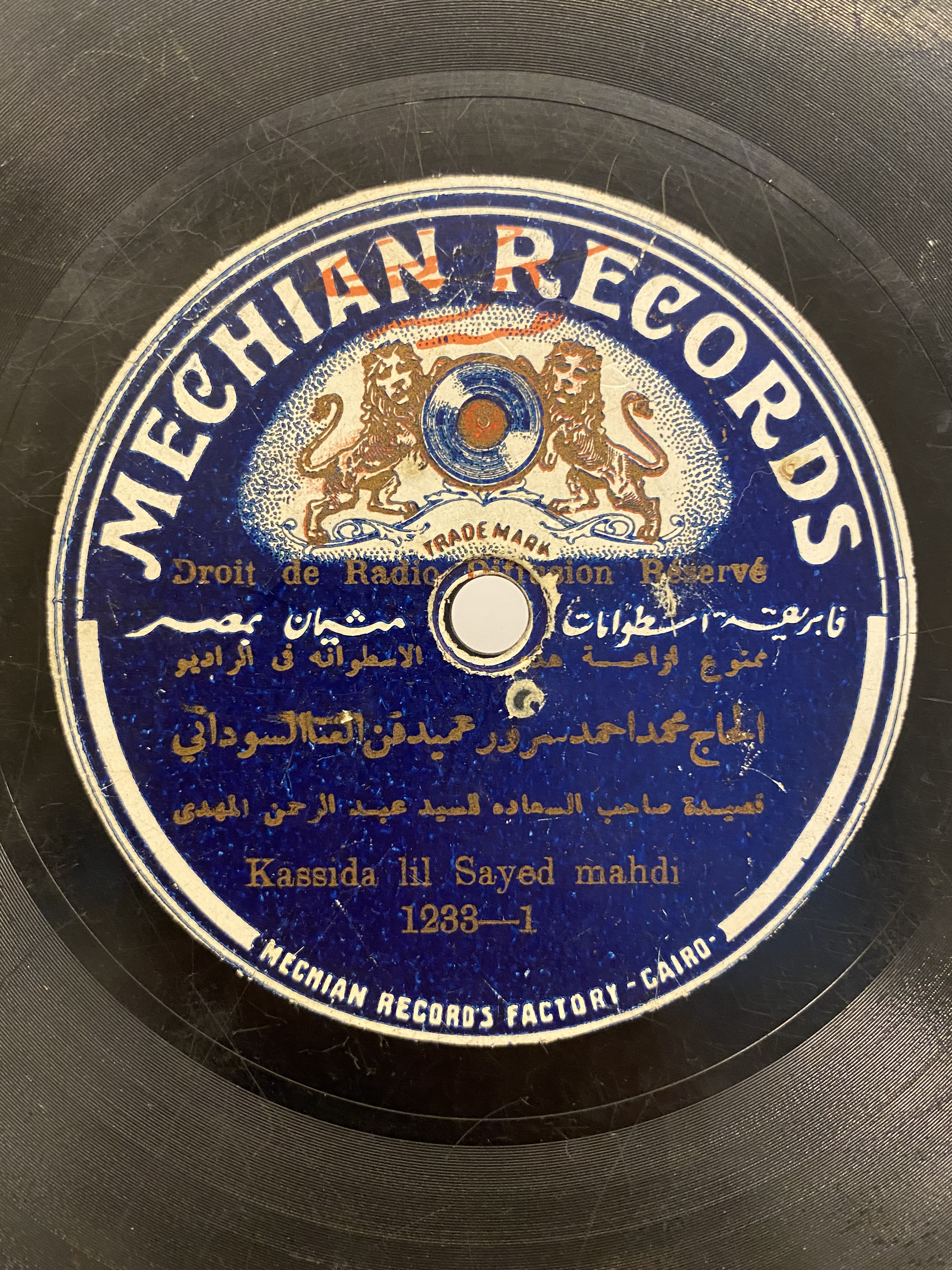 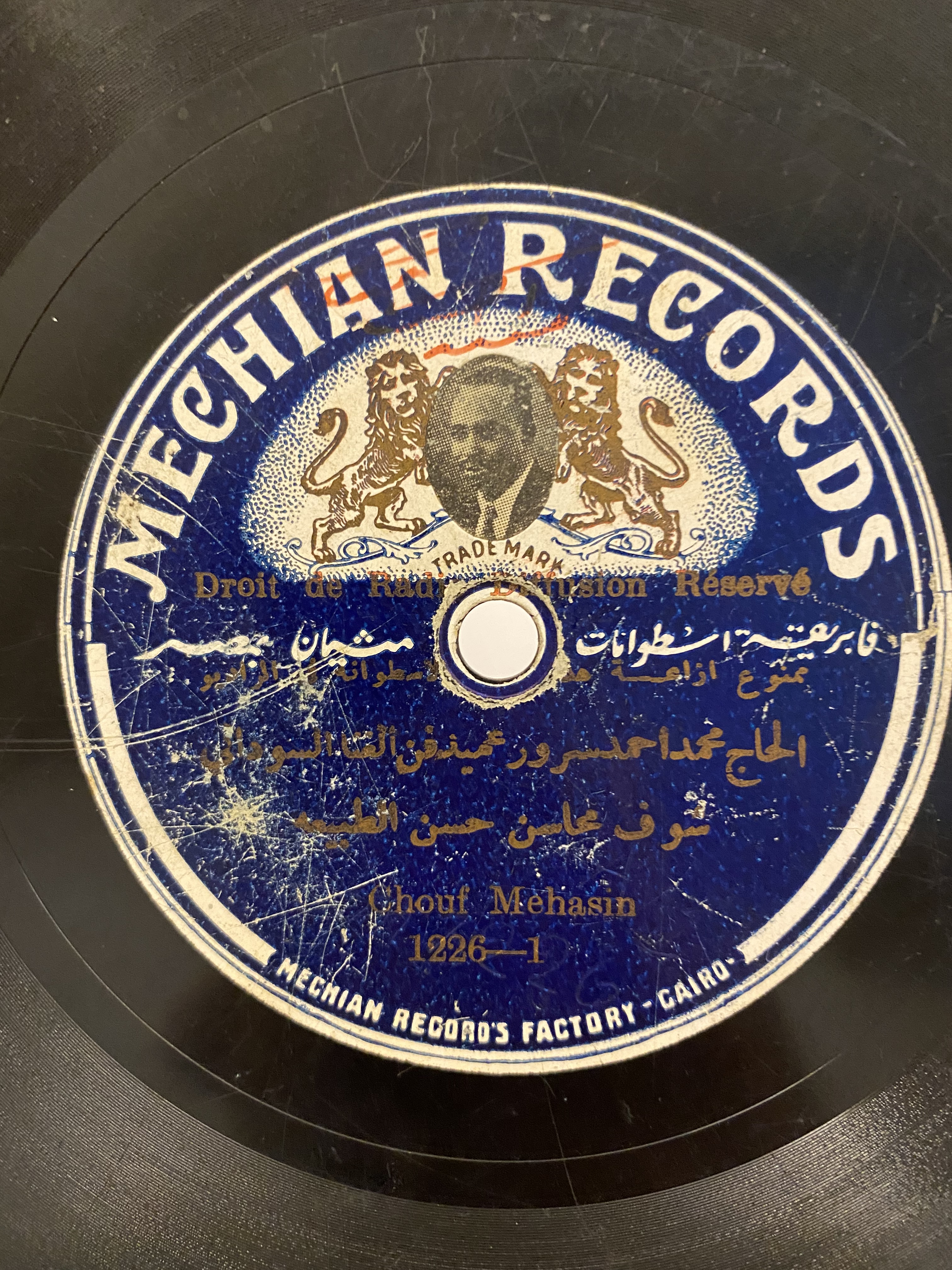 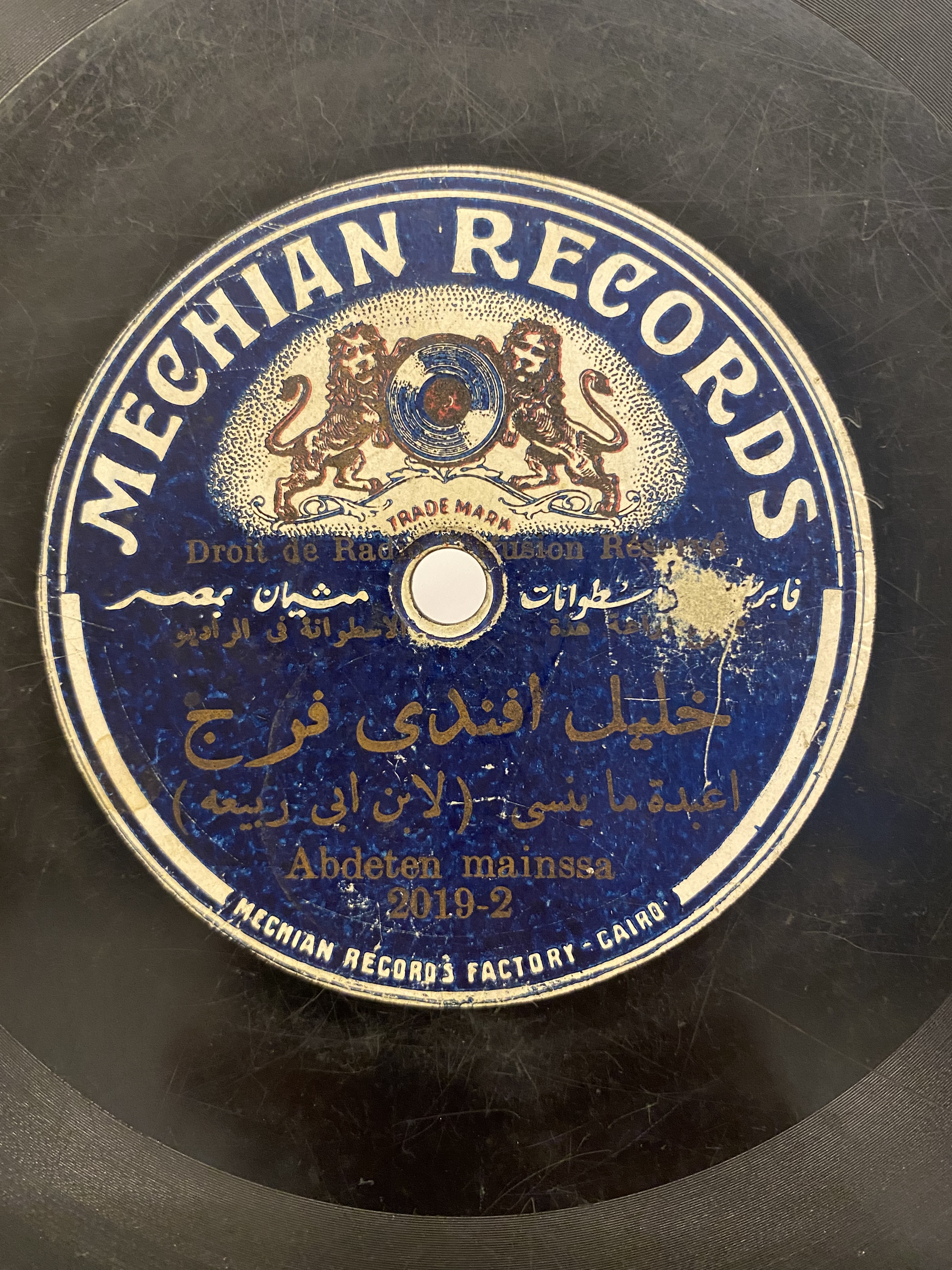 In the 1950s, several East African labels issued a smattering of Sudanese discs, including the Tom Tom label (one is featured on my “Alternate History” collection); however, some or perhaps all of these were examples of music from South Sudan. One label named Sudanphone was also active, although the scope of their releases is totally unknown. Their records were pressed in Greece and one issue is in the Benno Haupl collection at UC Santa Barbara.

It’s unclear to me if Dmitri Al-Bazaar was responsible for the entirety of Sudanese recordings that appeared on Odeon in the 1920s-1930s, but it seems likely. This piece, by Bechir el Robatabi accompanied by the tanbur, was perhaps issued ca. 1927-9.